On 4 April 2019, representatives of the “Romanian Judges Forum” Association, the “Movement for the Defence of the Prosecutors’ Status” Association and the “Initiative for Justice” Association met in Brussels with senior officials of the European Commission and the European Parliament, including the First Vice-President of the European Commission, Frans Timmermans, in an action that concerned the state of justice in Romania, and which included a flashmob organized by Romanian magistrates in collaboration with their colleagues in Belgium in front of the Brussels Palace of Justice. 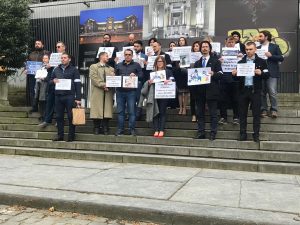 The meeting with Mr. Frans Timmermans was a technical one in which aspects of the changes to the laws of justice were discussed, widely criticized by relevant international entities. The European Commission has assumed its role of defending the rule of law under article 2 of the Treaty on European Union, and dialogue with Romanian magistrates is essential in this note for a technical appreciation of the whole context, with magistrates being technical experts only, within the limits of their status. In the event of further deviations from the rule of law and disregard of MCV recommendations, the Commission has coercive means at its disposal against the Romanian state, which it will not hesitate to put into practice. 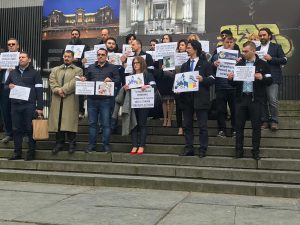 Through the legislative reforms adopted over the last two years, ignoring the Venice Commissions opinions and the reports of the European Commission, corroborated by the inability of the Superior Council of Magistracy to genuinely guarantee the independence of justice, judges and prosecutors being subjected to constant assaults, Romania is visibly distancing itself from the requirements of the rule of law. Such a situation tends to spread across Europe, putting under quarantine tens of years of dialogue and democratic progress that seemed irreversible. Under such circumstances, the European institutions cannot remain passive, the fate of the rule of law in Romania being their duty. 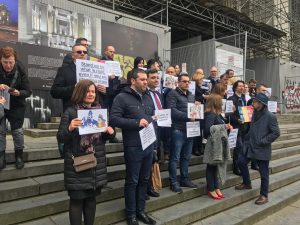 The right to information of European entities implies their possibility to freely and without pressure have a dialogue with the Romanian magistrates. Moreover, the lack of a real dialogue of the Romanian authorities with the judges and prosecutors led thousands of Romanian magistrates to protest in various forms, from the suspension of court sessions to the exits on the steps of the courts and prosecutors’ offices, requesting, among other things, the elimination of the adopted limitations on the freedom of expression of judges and prosecutors, the repeal of the provisions regarding the establishment of the Special Department for investigating the crimes committed by magistrates, the waiving of the provisions stipulating the doubling of the training period within the National Institute of Magistracy and the elimination of meritocracy in the magistracy.

The protest at the Brussels Palace of Justice (Rond-point piétonnier at Place Poelaert) lasted for about an hour, attended by around 30 Romanian magistrates who were applauded at the open stage and encouraged by dozens of Belgian and German colleague judges, as well as Belgian lawyers. For the first time in history, magistrates from a member state other than Belgium protested in Brussels for the rule of law. 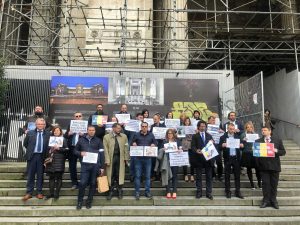 The Romanian Judges’ Forum Association: Press release on the Regulation of the Judges Section of the SCM regarding the organization of the judges’ contest for promotion