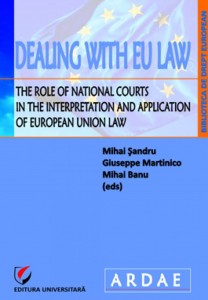 Between Rights and Charters: ECHR and EU law before national judges (Giuseppe MARTINICO)

Overcoming the legal Iron curtain: Similarities and dissimilarities in the use of preliminary references between new and old Member States (Juan A. MAYORAL)

Proportionality to balance trade in services and fundamental rights between the European Court of Justice and national courts (Giuseppe BIANCO, Tatum RAGUES)

The thin line between the Charter of Fundamental Rights of the European Union and the European Convention on Human Rights. Trends and patterns in preliminary references in Romanian courts (Daniel Mihail ŞANDRU, Constantin Mihai BANU, Dragoş Alin CĂLIN)

3.900 ROMANIAN MAGISTRATES: MEMORANDUM FOR THE REJECTION OF THE AMENDMENTS TO THE „LAWS OF JUSTICE”