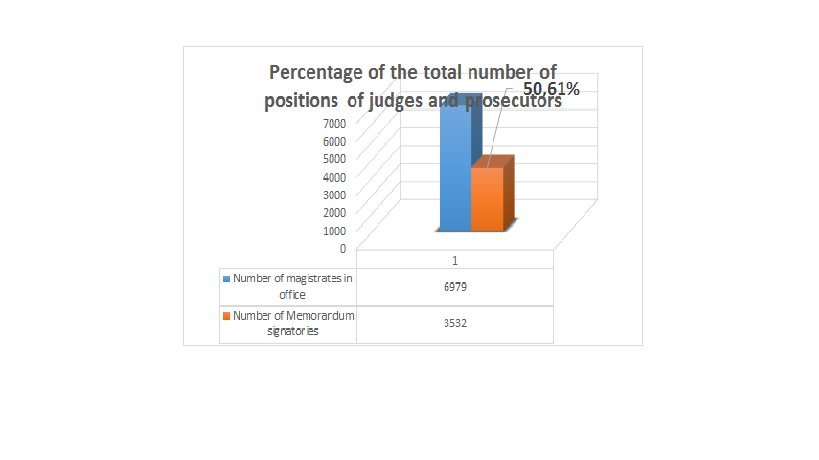 A small „referendum” of magistrates: More than half of judges and prosecutors in Romania ask the Government to withdraw the draft amendment to the „Laws of Justice”

The initiators of the Memorandum inform that until Tuesday, October 10th, 2017 at 16.00, a number of 3532 Romanian judges and prosecutors (out of a total of 6979 in the Romanian courts and prosecutor’s offices, respectively 50.61%), 8 assistant magistrates and 125 justice trainees adhered to the Memorandum for the withdrawal of the draft of the „Laws of Justice”, addressed to the Government of Romania, as a result of the refusal of the latter to take into account the negative opinion on the entire project issued by the Superior Council of Magistracy, in a meeting on September 28th, 2017, in accordance with the votes cast in numerous general assemblies of judges and prosecutors in courts and prosecutor’s offices, in which all the main changes of the draft law were overwhelmingly rejected.

The signatories of the Memorandum consider these changes promoted by the Minister of Justice (in particular, the reorganization of the Judicial Inspection, as a legal entity within the Ministry of Justice; the appointments at the top of the judiciary – the Prosecutor General of the Prosecutor’s Office attached to the High Court of Cassation and Justice – HCCJ, first deputy and his deputy, the chief prosecutor of the National Anti-Corruption Department – DNA, his deputies, the chief prosecutors of the Prosecutor’s Office attached to HCCJ and the DNA, as well as the chief prosecutor of DIICOT and their deputies; – the proposed amendments regarding the magistrates’ liability regime, susceptible of violating the independence of the judiciary; the change of the magistracy recruiting system: the age limit of 30 years for admission to the National Institute of Magistracy and the requirement of seniority in another legal profession for at least 5 years; the change of the promotion system to a higher court / higher prosecutor’s Office; the maintenance of the actual status quo regarding the budget of the courts of justice which is administrated by the Ministry of Justice; the establishment within the Prosecutor’s Office attached to HCCJ, of a specialized directorate with exclusive jurisdiction to carry out criminal prosecution for the acts committed by judges and prosecutors, regardless of their nature and gravity – jurisdiction per personam, aiming to a professional category instead of illegal deeds, without regard of their severity) flagrantly violates the Co-operation and Verification Mechanism, its consistent reports and the foundations of the magistracy in a democratic state.

At the same time, the magistrates who have signed the Memorandum show that although the opinion of the Superior Council of Magistracy is not, according to the law, mandatory, according to the law, it also cannot be ignored, as the recent jurisprudence of the Constitutional Court of Romania develops and emphasizes in particular a new dimension of the provisions of Article 1 para. 5) of the Constitution („In Romania, observance of the Constitution, of its supremacy and of the laws is mandatory”), in the sense of attaching its normative content to the principle of loyal cooperation between state’s institutions and authorities. Therefore, the legislative norms which ask for the opinion of the Superior Council of Magistracy must be interpreted in the spirit of loyalty to the Fundamental Law and in the spirit of an obligation for the public authorities to apply the Cooperation and Verification Mechanism and to follow the recommendations established in this framework.

Contrary to the data circulated by the press, the total number of judges and prosecutors in office in Romania is 6979 and not 9000. It results from the lists with current existing magistrates in offices and vacancies at 04.10.2017, for prosecutors, respectively on 01.09.2017, for judges, displayed on the web site of the Superior Council of Magistracy.

At the mentioned data, there were:

In the light of the above mentioned considerations, the unwavering will of the majority of magistrates, which, according to the signatories of the Memorandum, the Government of Romania (to which the Minister of Justice is part of) cannot be disregard in a Member State of the European Union, converges in the sense of removing any doubts about a possible deviation of these important legislative drafts to the detriment of the magistracy, the Ministry of Justice failing to develop an effective dialogue with the magistrates, the Superior Council of Magistracy, the professional associations of judges and prosecutors, in order to improve the legislative framework, after carrying out the necessary impact studies and after presenting serious and credible motives regarding the proposed amendments, in order to modernize justice, in accordance with the Cooperation and Verification Mechanism.

The initiators of the memo also point out that further adhesions to the Memorandum are still being received.