The undersigned judges and prosecutors, assistant magistrates and National Institute of Magistracy trainees, given the following:

– recent public developments concerning the amendments brought to the justice laws which highly jeopardize the independence of judiciary and Romania’s evolution within European Union and Council of Europe, as previously concluded by European Commission and GRECO

– the overwhelming majority of the Romanian judges and prosecutors who rejected the above mentioned project amendments, their will having so been disregarded that the parliamentary process lacked any real dialogue, impact or prognosis figures and thus turning into a real “judicial experiment”

– statements of the Minister of Justice and different parliamentarians which, in contradiction with article 11 of Constitution, resulted in minimising the binding conclusions of GRECO report (which specifically requested Romania to refrain from adopting amendments to criminal legislation in non compliance with its international commitments and thus jeopardizing the domestic fight against corruption) and in disregarding both the legal opinion of Venice Commission which is about to be delivered on October 2018 and the one which should be asked for with regard to Criminal and Criminal Procedure Code amendments (the president of the Special Joint Commission of Deputies Chamber and Senate having clearly stated that Romanian Constitutional Court would not wait for the Venice Commission legal opinion on the justice laws, the case being listed for judgement on the raised objections on 30th of May). We therefore claim that the Minister of Justice, in his standing role of Venice Commission member should have publicly asked for a duly observance of its upcoming opinion, not the opposite

– the legislative proposals currently undergoing public consultations represent an involution in the creation of a modern criminal justice system adapted to the new social realities, as well as a misrepresentation of the purpose of the criminal trial and the state’s criminal policy, the change of paradigm from a criminal justice that protects the crime victims to a new concept that puts the defendant in a privileged position being obvious

– the on-going process of enacting legislation which has been carried on in a completely unpredictable and unclear manner, giving no clue on the way that submissions of judiciary would be used hereinafter and just taking advantage of its presence in order to validate a fake consultation lacking real dialogue

– the overlooking of the rule of law principles, of the statute of magistrates and of the transparency rules that must characterize the process of public consultations, the attempt to intimidate Romanian judges and prosecutors by turning some regular disciplinary offences of low social risk into criminal offences with punishments whose limits are close to those set for the crime of murder (for instance, the crimes stipulated under Article 280, Index 1 – Bad faith, and Article 280, Index 2 – Severe negligence)

– the visceral hatred towards the judiciary shown by the decision to place Romanian judges and prosecutors in the category of criminal clans, on the same level with procurers and human traffickers, with loan sharks and smugglers, thus contriving criminal offences in order to „stop clans, as well as prosecutors and judges, from committing specific crimes”;

– the escalation of the corruption phenomenon, which represents a serious threat to development and stability, with negative consequences on all levels of governance, as well as the repeated attempts, on multiple levels, to invalidate the Romanian magistrates’ efforts to fight corruption crimes;

– the actions aimed at manipulating the public opinion and the unprecedented attacks targeting numerous judges and prosecutors, including those handling high-level corruption cases, but also against the most important state institutions which play a role in defense and public safety, including the National Anticorruption Directorate, or against those state authorities representing Romania in front of European Union partners (see the arbitrary replacement of Romania’s Governmental Agent at the CJEU because of his refusal to authorize draft legislation contravening the European Union law);

– the lack of any concrete projects to develop a judiciary map and to insure an infrastructure appropriate for the current needs in order to carry out the specific activity in courts and prosecutors’ offices, the lack of establishing the optimal workload of Romanian magistrates based on objective criteria, as they constantly carry out 10-12 hours per day of intellectual work, the lack of any concern from authorities for an efficient functioning of the National Institute of Magistracy and the National School of Clerks;

– focusing the legislative amendments on unsettling the profession entrance and promotion system, without any impact study, encouraging or determining the definite or temporary leave from the profession of certain magistrates, receiving former magistrates having a 10-year seniority into the profession  without any testing, introducing a material liability system which would immediately involve magistrates in trials in order prove any lack of judicial error of their part (most of the times, it is due to poor legislation, lack of conformity of national legislation to the European legislation a.s.o), all of which do not seem to aim at improving the quality of the judicial service, or at any development of the judicial system, but instead at its „bankruptcy”;

– a lot of the envisaged changes have nothing to do with the purpose stated by the legislator and are going against the desired objectives, as the statement of reasons and the proposed legislative amendments contain solutions that are inadequate to the legal realities in Romania and to the protection standards of fundamental values imposed at European and international level, all of which could impair the quality of the judicial service;

– the fact that the Justice Minister takes the liberty to publicly attack all National Anticorruption Directorate prosecutors, speculating that they administer evidence by breaking the law, opining on the constitutive elements of crimes, on establishing  persons’ guilt or innocence, demanding lists of acquittals pronounced in courts (Uzbekistan is the only state where the number of acquittals is zero[1], whereas in democratic states acquittal solutions are the expression of a healthy judicial system);

– the fact that the CVM Reports constantly underline that additional measures shall be taken in order to provide adequate support to magistrates who are the target of criticism undermining the independence of justice, which is obstinately ignored by the Romanian state;

– as a European Union member state, the Romanian state must apply the Cooperation and Verification Mechanism and to take into account the recommendations established within that framework, in accordance with the provisions of  art.148 para. (4) of the Romanian Constitution;

– the fact that when democracy and fundamental freedoms are in peril, a judge’s reserve may yield to the duty to speak out,[2]

WE THEREFORE ADOPT THE FOLLOWING RESOLUTION:

1. we ask political actors for the immediate cessation of attacks against the rule of law and Romanian judges and prosecutors. Romania is and should remain member of the European Union and Council of Europe, not an out-of-law territory. Hands off  justice!

3. the postponement of any decisions on the part of the competent Romanian authorities concerning the judicial laws, until the Venice Commission’s opinion is received and the bills are set in line with the European Commission and GRECO’s requests. The judicial power must be independent, which entails the existence of certain guarantees in relation to the other two state powers, in order to consolidate the independence and impartiality of the magistrate

4. the real consultation of the judges and prosecutors on the legislative packages that concern their activity, through the general assemblies of courts and prosecutor’s offices. The Supreme Magistracy Council does not represent the magistracy if it ignores the point of view of thousands of Romanian magistrates. The Supreme Magistracy Council’s legislative proposals cannot be promoted in a non-transparent fashion and cannot represent the will of 5-6 members. We demand the real consultation of civil society, whose reactions must be considered within the framework of legislative debates

5. we ask for dignified work conditions, stating that carrying out a high-quality act of justice presupposes the allocation of the minimally required time to study the cases, analyze the legal issues and the continuously changing legislation, not the issuance of solutions that may be affected by improper work conditions, lack of time and overburdening

6.  we ask the Justice Minister to abstain from actions that intimidate prosecutors and affect the rule of law and the independence of the judiciary

7. we ask for ratification of Protocol no.16 to the Convention on the Protection of Human Rights and Fundamental Freedoms, adopted by the Committee of Ministers on 10 July 2013 and open for signing on 2nd October 2013, in Strasbourg. The Protocol stipulates the fact that the contracting parties’ highest courts may ask the European Court of Human Rights for an advisory opinion when they deem that a certain cause on their dockets raises a serious problem regarding the interpretation or the enforcement of the Convention or of its protocols

8. we ask the members of the Supreme Magistracy Council to immediately and firmly condemn the attacks on the rule of law, on judges and prosecutors. We therefore claim necessary both the implementation of objective criteria in taking yearly evaluation of the Council elected members’ activity and the immediate update of their dismissal procedure

9. we ask the representatives of legislative power as well as the members of the Supreme Magistracy Council to adopt immediate measures that would offer adequate support to the magistrates against whom criticism that undermines the independence of the judiciary is levelled

10. we encourage the general assemblies of courts and prosecutor’s offices to convene immediately and to decide on the forms of protest they deem necessary

11. we invite all Romanian citizens to join this resolution, in their capacity as bearers of hopes and aspirations for the moral healing of the country and for keeping it on the coordinates of civilized Europe

[2] See Declaration on judicial ethics, adopted by the European Network of Councils for the Judiciary (ENCJ),  General Assembly, held in London during 2-4 June 2010. 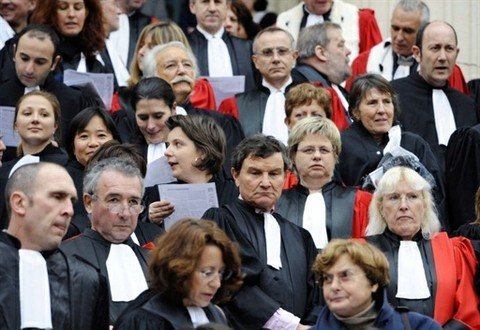